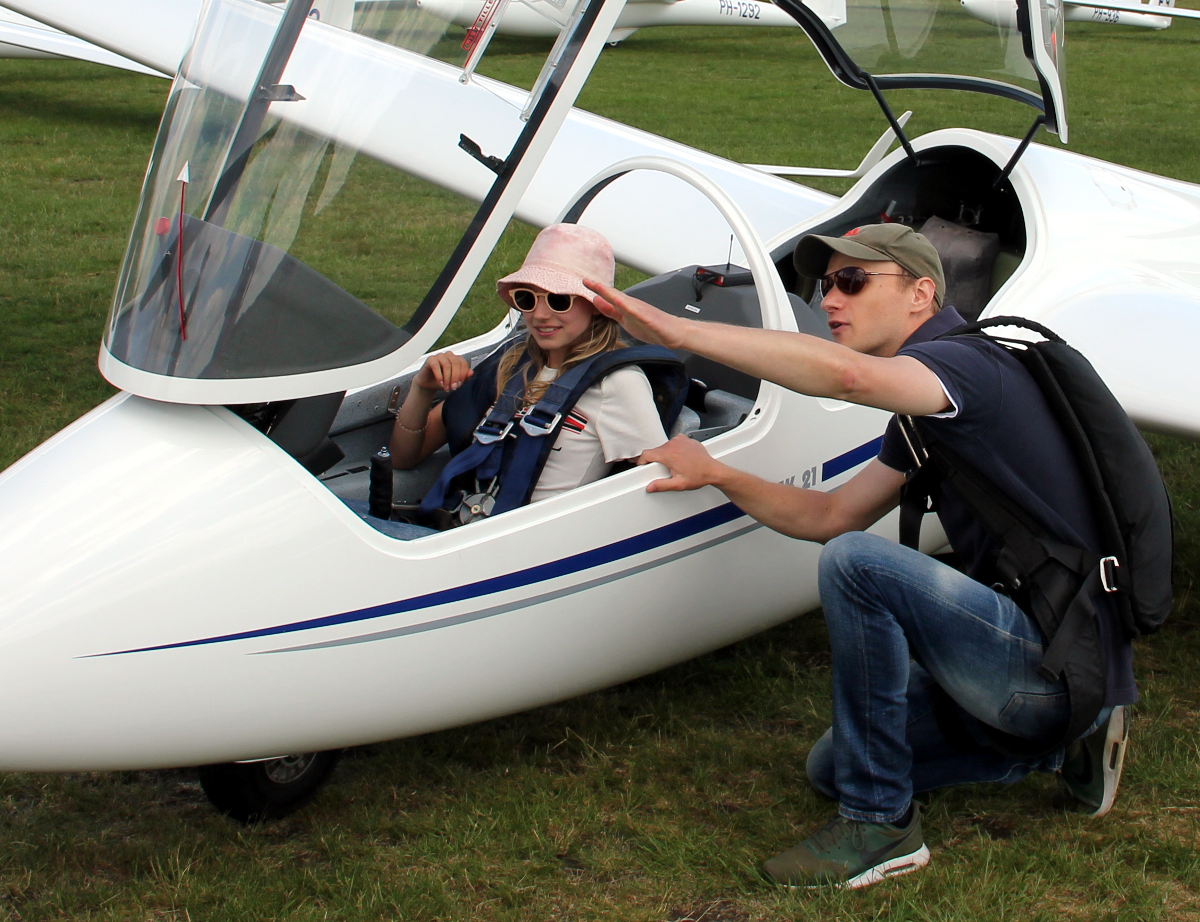 USE OF THE EMERGENCY PARACHUTE
Glider pilots fly with an emergency parachute. Even though you most likely will never need to use it, it could save your life in an emergency situation. The parachute needs to be checked and repacked every year. It should always be stored in a dry location (don’t put it in the wet grass) and handled with care. Your instructor will show you how to put the parachute on properly and how to use it. He or she will also tell you where to stow it after the flight. 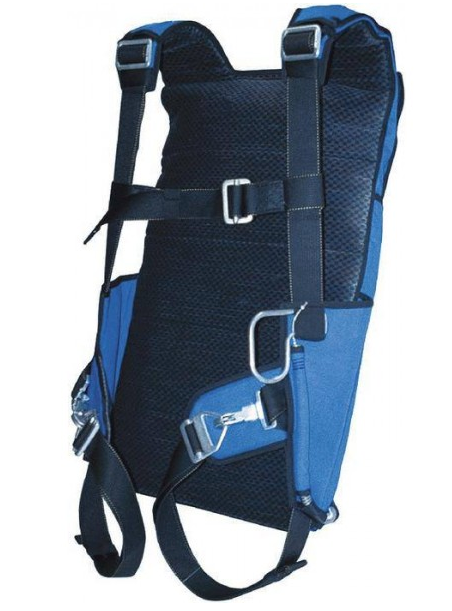 When you familiarize yourself with a new type of glider you need to practise how to get out of the plane during flight (the bailout procedure) by touching – not actually operating – all required levers and the seatbelt locking buckle with your eyes closed. By touching the levers with your eyes closed, you memorize their location and you will be able to find them even in case of poor visibility. The location and operation of the canopy jettison levers (the levers that open the canopy) differs between various glider types.

If there is no other option and you really need to bailout in flight:
Once stable below the parachute and well before touchdown:
When approaching the ground: 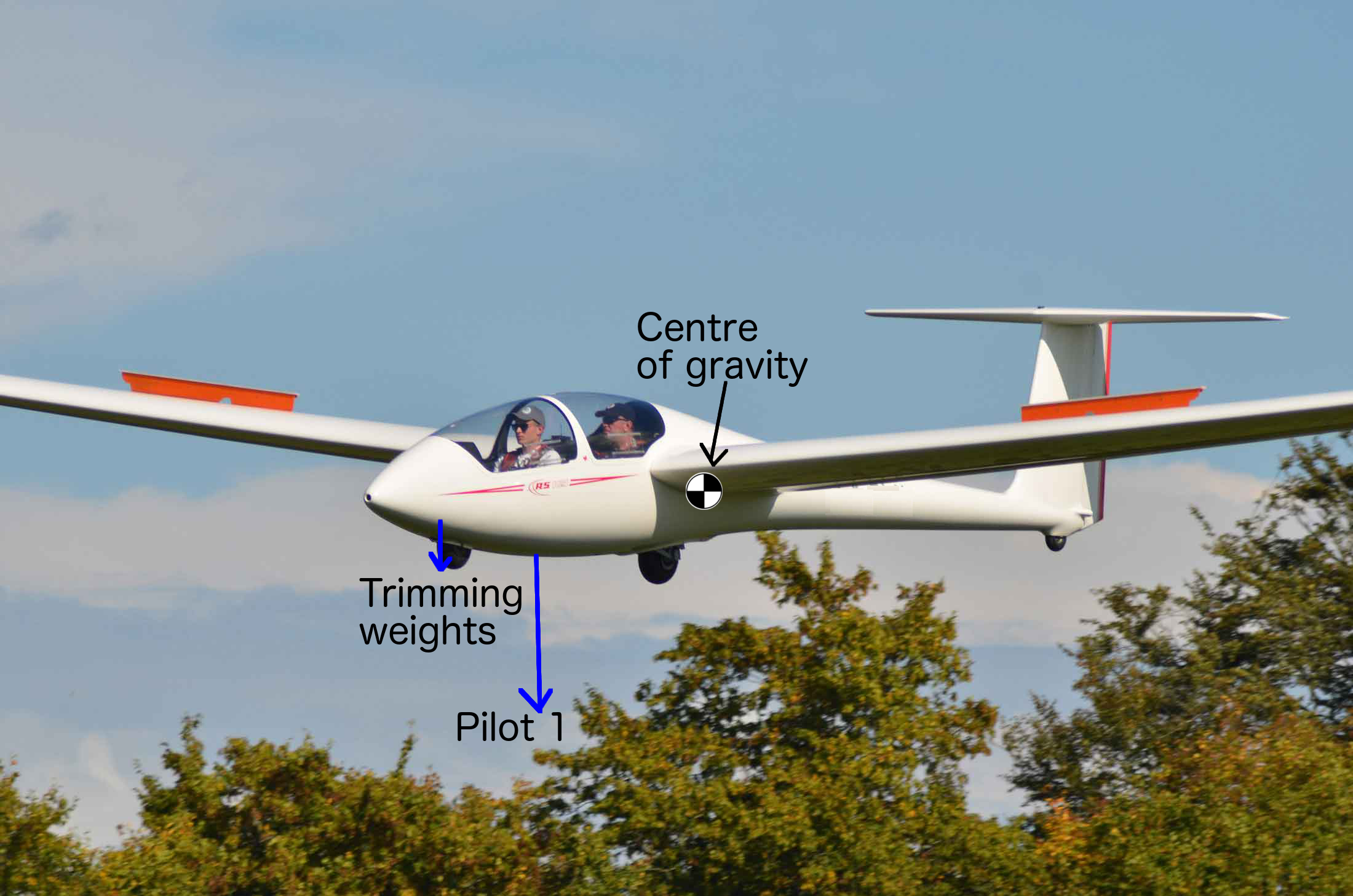 In order to fly safely, the centre of gravity of a glider must be in between certain limits. For that reason, there is a minimum and maximum weight for the front seat. The flight instructor (or rear-sitting pilot) sits approximately in the centre of gravity and his or her weight is therefor less important to balance the glider. However, the maximum take-off weight should not be exceeded; this includes the weight of the empty glider, both pilots and their luggage. If you are too light for the front seat (often +/- 150 lbs/70 kg minimum load); your weight needs to be supplemented with trim weights (usually lead plates) in the nose of the glider. If you are too heavy (in some gliders over 110 kg/240 lbs) there is no other solution than to lose weight.

In the aircraft flight manual you will find the maximum and minimum weight for your type of glider. There is also a placard in the cockpit and there should be a loading chart in the aircraft documents as well, based on the numbers from the latest weighing of the empty glider. In this lesson your instructor will show you how to install the trim weights. Before the next flight you will be able to install them yourself.

NEVER FORGET YOU TRIMMING WEIGHTS!
Trimming weights are extremely important for your own and your instructor’s safety. Do not forgot to bring them, and remember to remove them after your flight. If the trimming weights are made out of lead, first wash your hands after using them and before eating something. Lead is poisonous.

GETTING IN THE GLIDER
Your instructor will show you how to get in the glider for your first flight. The front seat is yours, the instructor will sit in the back. It is important that you are sitting comfortably, with an unobstructed view all around. If necessary, you can use seat cushions made out of sturdy memory foam to improve how you are sitting. Smaller pilots can put some extra cushions behind their back to have a more forward seating position. Whether you are using cushions or not, you have to be able to reach and operate all flight controls and adjust the flight instruments. Use your right hand to hold the control stick. Left-handed pilots also need to learn to fly the glider using their right hand; you will need your left hand during landing to control the airbrakes. Verify that your rudder pedals are adjusted to the length of your legs. When making a full input with the rudder, your knees should remain slightly bent. If your leg is stretched, your knee may lock into place and accidently block the rudder. Seatbelts have to be worn throughout the whole flight. To put them on: first tighten the straps around your hip, then adjust the shoulder straps.

WINCH LAUNCHING
The winch launch goes like this: first the cable is hooked onto the glider, then the winch driver will “take up the slack”, and finally the glider will start to accelerate very quickly from zero to around 60 kts/110 kmh.

When the glider leaves the ground it takes a shallow climb, which will gradually become steeper until the normal climb angle is reached. This increase in climb angle happens while the altitude increases and only when there is sufficient airspeed. Try to look out of the cockpit as much as possible during the launch. You won’t be able to see the horizon or judge your climb angle when you look over the glider’s nose. The climb angle can best be estimated by regularly looking left and right during the launch.

In the last part of the launch the climb angle becomes shallower. Before releasing the cable we gently push the nose down to ease the tension of the winch cable. After that we pull the cable release knob. (If we would accidently wait too long before releasing the cable, the housing of the release hook should move backwards and automatically release us from the winch cable.) Always give a second pull on the cable release knob to make sure the cable has really been released. It might be good to know that you will probably experience a strange floating sensation in your stomach while pushing down the nose of the plane before release. When we release the tension on the release cable, the gravity on our body temporarily decreases. Though perhaps a bit scary at first, this feeling is completely safe and normal, and you will soon get used to it.

WINCH POWER ALTERATIONS
If the winch driver is pulling the cable in too quickly or too slowly, your airspeed may become too high or low for a safe and efficient launch. Depending on local procedures your instructor will either use the radio to tell the winch driver to change the power setting, or he/she will use the glider to signal the winch driver.

When the airspeed is too low to climb safely the instructor will clearly lower the nose. After the power has increased again and the airspeed is safe you will slowly move back towards the right climb angle.

When the airspeed is too high the instructor makes clear inputs with the rudder pedals. The winch operator will respond by lowering the power setting.

START INTERRUPTION
In case of a start interruption or a cable break at low altitude, the instructor will lower the nose back to a normal flight attitude and continue the flight at a landing airspeed. To make sure no remaining parts of the cable are attached, we pull the cable release knob twice. Depending on your altitude the instructor will either land straight ahead or fly a shortened circuit; you will learn more about this in Lesson 28.

FREE FLIGHT
Your instructor will do most of the flying during your first flight. He or she will tell you what’s happening during all phases of the flight. When the sounds become muffled and you notice an increase in ear pressure ,try swallowing or yawning a couple of times. As you climb, the air pressure decreases, while the inner ear is still at the (higher) ground level pressure. By swallowing or yawning you level the differences in air pressure. Of course your first flight will be a gentle one. We won’t do steeper turns (and a loop-the-loop if you wish) until you have become more accustomed to flying a glider. 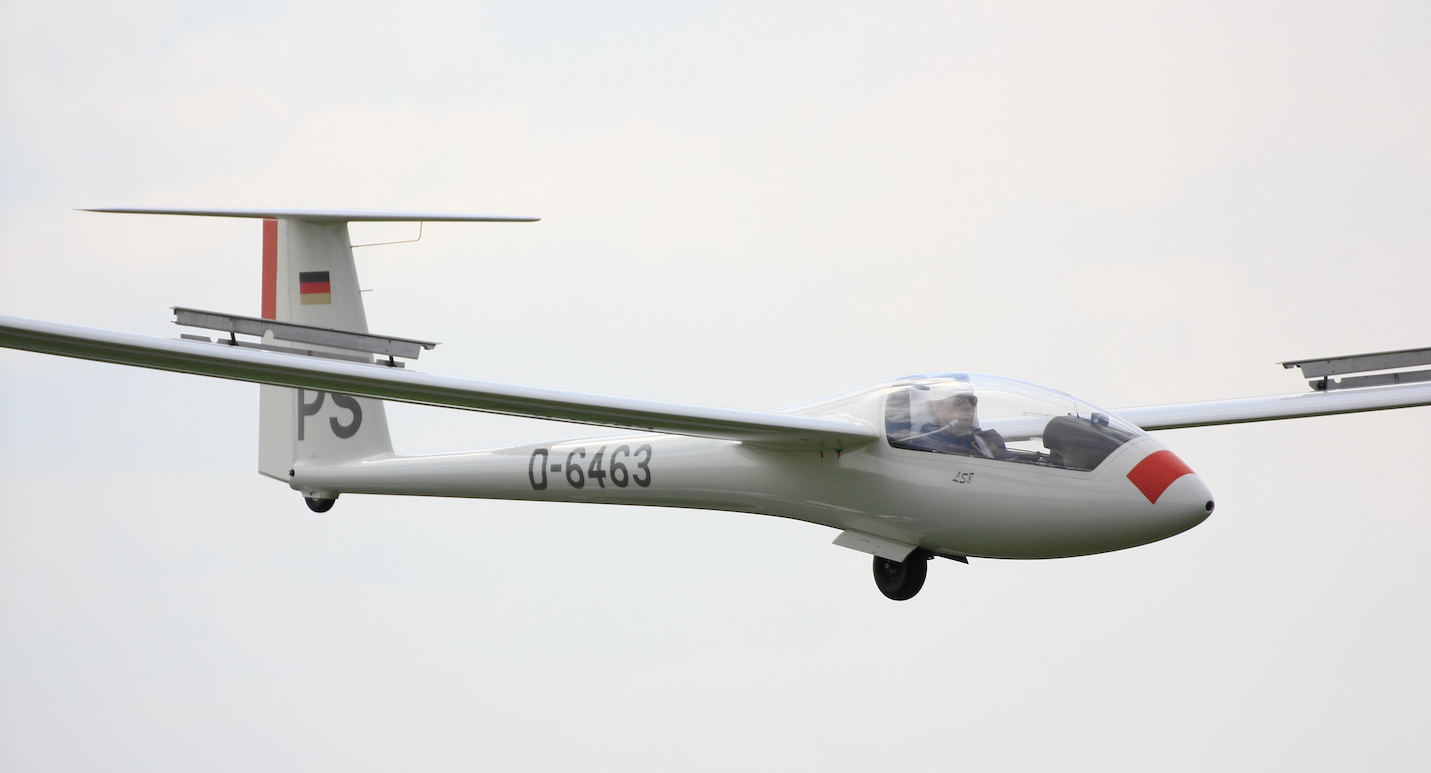 AIRBRAKES
The flight instructor will show you how to use the airbrakes. During a normal straight flight a glider has a very low descent rate. When approaching the landing area or runway you are still at a height of around 300 ft/100 m and you could easily fly for another couple of miles before touching the ground. By using the airbrakes, you increase the drag and decrease the lift, which results in a higher descent rate. The airbrakes enable you to land precisely where you want to land.

LANDING
While landing we descend and aim for a specific landing spot on the runway or on the airfield. A couple of feet/meters above the ground we stop the descend and start the so-called “round-out”. We fly parallel to the ground at a very low altitude of just 2-3 feet (1 meter) above the ground and wait for the airspeed to decrease; the glider will gently touchdown on its main and tail wheel simultaneously. If necessary, you can shorten the landing rollout by using the wheel brakes.

After the introductory flight you may well think: “What on earth have I just started?” Do not worry, you will soon get used to flying. Already after a couple of flights, you will be able to do many things yourself.