HOW CAN AN AEROPLANE FLY?

You’ve probably done it on a hot summer day: resting your elbow in the open window of a driving car to feel the cool air outside. When you do this, you will experience the following:

An aeroplane can only fly or travel forwards if it has speed.

If the wing was a completely flat board placed parallel to the airflow, it would have only frictional resistance. 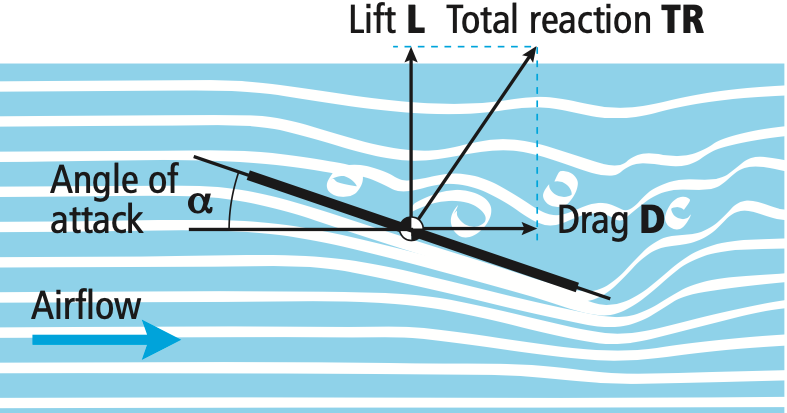 When, like our elbow dangling out of the car window, the board is at an angle to the airflow (the angle of attack) the air flowing past it is deflected downwards, creating a counterforce upwards and backwards called Total Reaction (TR). This TR force can be divided into two forces: one parallel to the airflow called Drag (D) and another perpendicular to it called Lift (L).

A plane with completely flat wings would have a lot of drag and this is why, in the early days of aviation, the curved shape of the wing was copied from birds. A bird-shaped wing has a very low resistance (or drag); exactly what we need.

In summary: by deflecting the airflow downwards we generate an upwards force called lift, but this comes at a price: drag. Placing the wing in an airflow will deflect the air up in front of the wing and down at the trailing edge. The shape of the wing has been optimised to enable lift with the smallest possible drag penalty.

BALANCE BETWEEN THE LIFT AND WEIGHT OF A GLIDER
In practice we say that the lift must be the same as the weight of the aircraft. For a better understanding of the theory we should say that TR (Total Reaction) equals Weight (W). 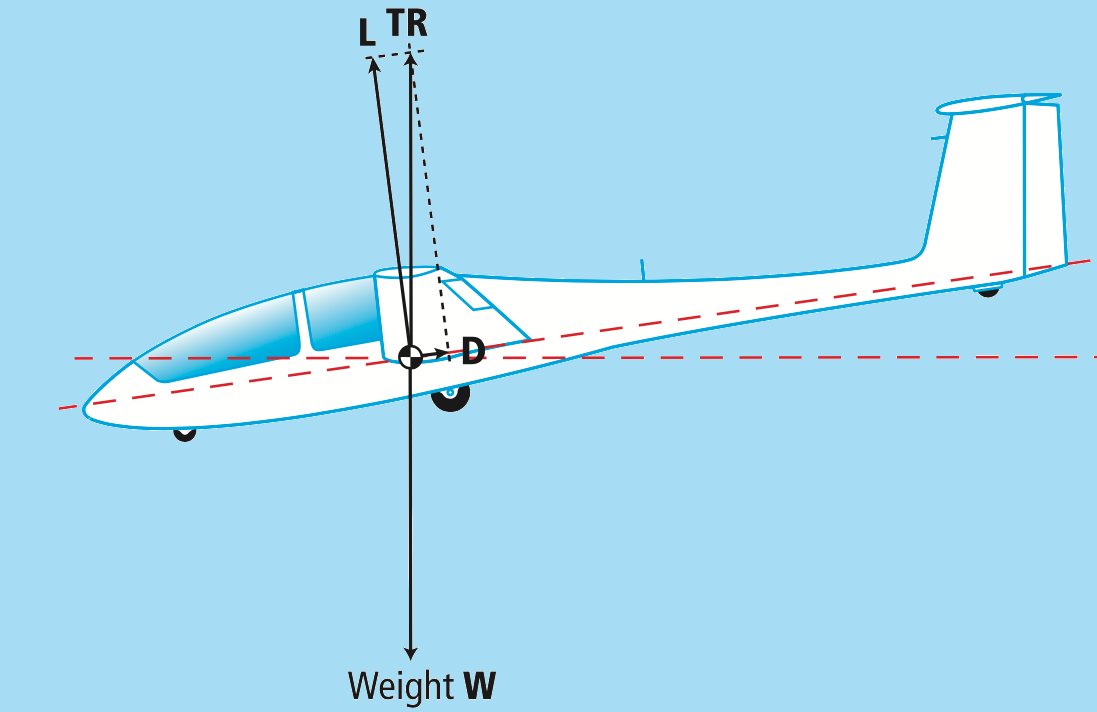 In the illustration Lift is shown perpendicular to the airflow and Weight is pointing vertically downwards. The Drag is parallel to the airflow. Compared to Weight, TR is the resultant force of Lift and Drag. When flying straight with the wings level, Lift is about the same as TR and in this case you could say that Lift equals Weight.

ANGLE OF ATTACK AND DRAG 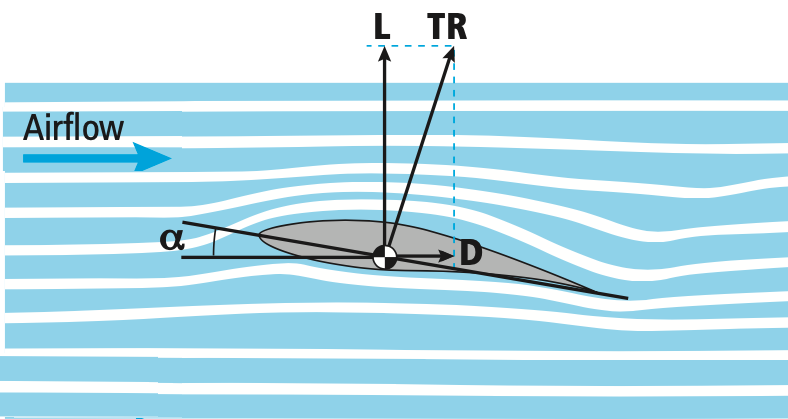 (But, as we will explain in more detail below, there is a limit to how much the angle of attack can be increased. At an angle of about 15° the air can no longer follow the surface on top of the wing; this is called the critical angle of attack.) 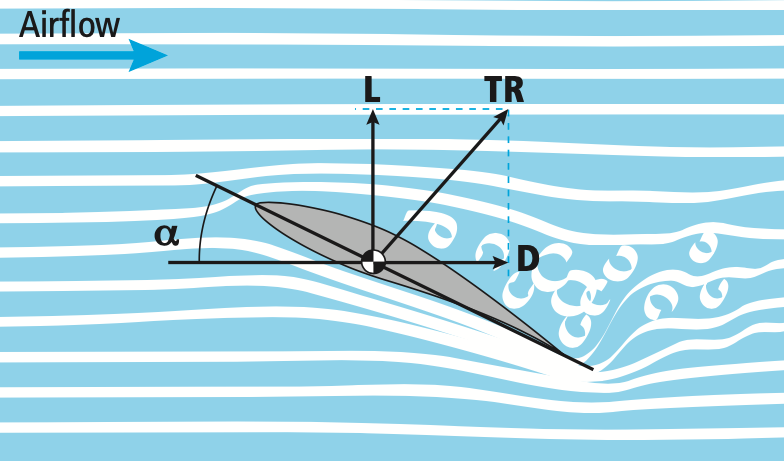 In summary: at small angles, the ones used for normal flying, on increasing the angle of attack, both lift and drag increase. But, an increase beyond the critical angle leads to marked decrease in lift and increased drag.
ANGLE OF ATTACK AND WEIGHT

ANGLE OF ATTACK AND AIRSPEED

Let us suppose you are flying with your instructor in a two-seater glider and you need to reduce your airspeed. What should you do with your angle of attack? If it stays the same, the lower airspeed means less lift, so to maintain enough lift to balance the weight, a greater angle will be needed.

BUT WE CAN INCREASE THE ANGLE OF ATTACK ONLY SO FAR!

However, a greater angle of attack doesn’t always mean more lift; if we increase α beyond a specific limit (the ‘critical angle of attack’) the airflow can no longer smoothly follow the top surface of the wing and it will instead separate from it in a turbulent, stirred-up mess (see illustration below). When this happens, the wing obviously doesn’t deflect the air as efficiently; or to put it another way, the lift will decrease and the drag will increase. The wing is said to be ‘stalled’. 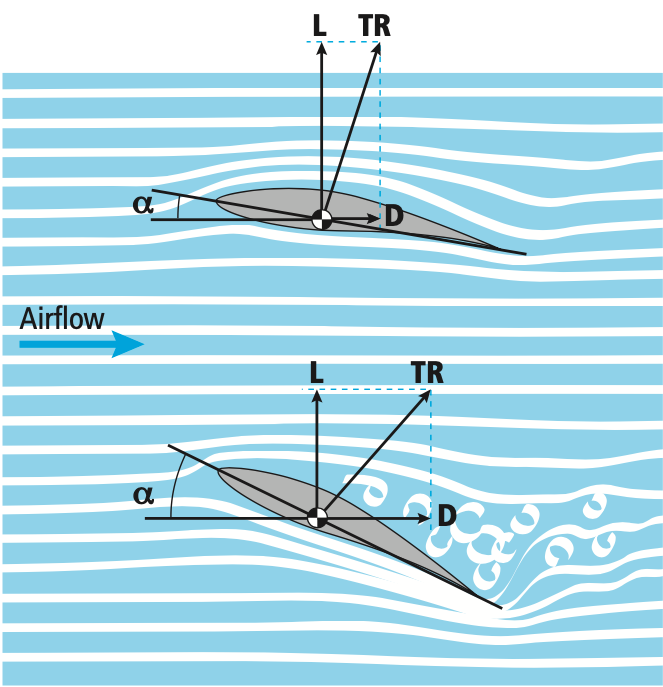 This happens if we try to fly slower and slower by easing the stick further and further back: we will eventually arrive at the point where the airflow is meeting the wing at the critical angle of attack. If we try to maintain unaccelerated flight any slower than this, moving the stick back will no longer raise the nose, and no longer increase the angle of attack; the wing is stalled. Instead, the airflow over its top surface becomes turbulent, the drag increases dramatically, and the glider will start descending through the air at a much steeper angle than in normal flight. Because the airflow over the ailerons may be disrupted, there will be little resistance if you try to move them, and it may no longer be possible to use them to keep the wings level. The turbulent flow over the wing may be felt as a shaking (or ‘buffet’) of the controls or fuselage.

Fortunately, as you will see in the stalling lesson, recovering from a stall is really simple – just ease the stick forward to lower the nose and reduce the wing’s angle of attack to less than the critical angle. Once the wing is unstalled, the airflow over the wing becomes smooth, the drag will decrease dramatically, the rate of descent will return to normal, and all the controls will start working properly (so that you can level the wings with aileron if you need to). The glider will automatically speed up to the appropriate speed to make the lift balance the weight, and everything is fine.

Problems can arise, however, if a frightened, or nervous, or startled pilot reacts to failure to raise the nose with further rearwards stick. This can keep the glider in a stall while the unfortunate pilot thinks that the controls have stopped working. It is to avoid this natural mistake that your stalling lessons will be so important.

The glider’s wing stalls whenever α reaches the critical angle. This is possible at any airspeed, at any glider attitude. The most reliable symptom of a stall is that moving the stick rearwards does not raise the nose. Regardless of airspeed, attitude, airflow noise or any other indication (or lack of it): if you move the stick back and the glider does not respond by pitching up, or move it sideways and the glider does not respond, ease the stick forwards. 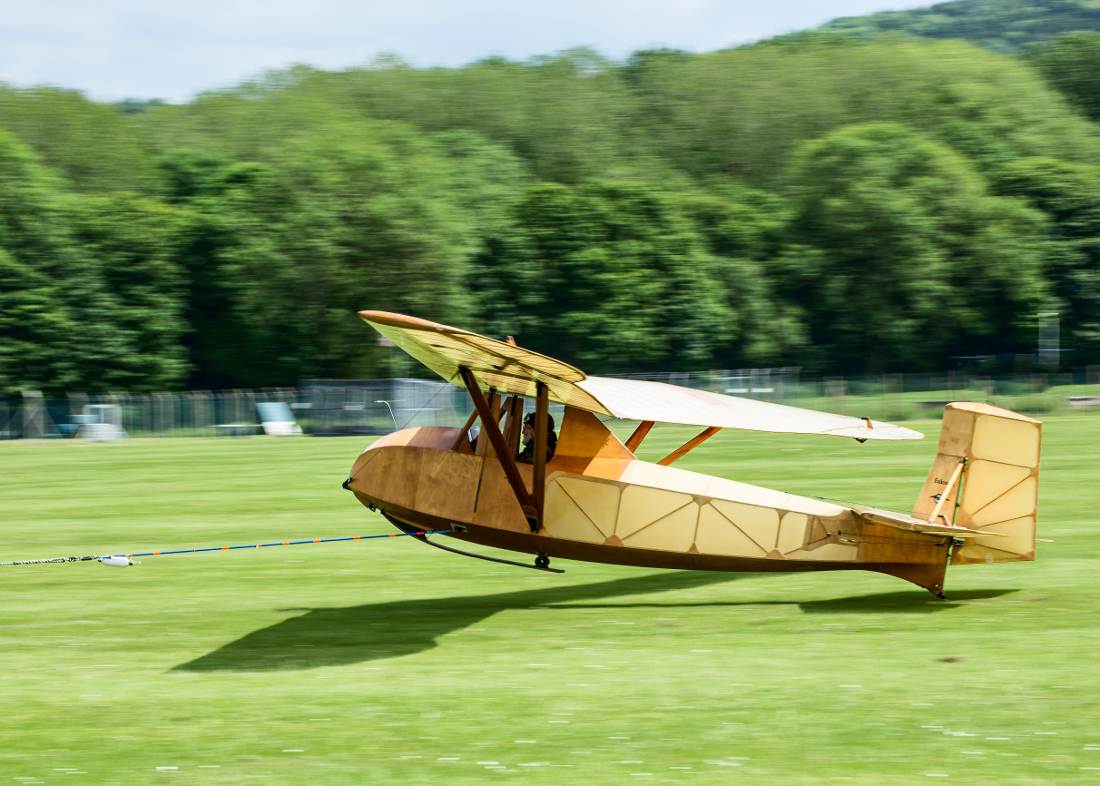 The principles of flight are based on basic aerodynamic laws. The same laws apply to a 1931 Slingsby made of tubes, wood and linen as to a modern high-tech glider like the Duo Discus built out of glass and carbon fibres.