SAFETY RULES IN THE AIR

LOOKOUT!
The most important safety rule is to keep constant track of what happens outside of the cockpit. It is much more important to know what’s happening around you than what your instruments are telling you. You should never be staring at your instruments. In fact, you do not really need your instruments to fly safely; later on in your flight training you will perform some flights with a limited instrument panel and you will notice that there are many other methods of judging airspeed and altitude apart from using the instruments.

Make a habit of telling your instructor about every glider or aircraft you see outside. Your instructor will then know that you are looking and he or she can judge how thoroughly you are scanning for other traffic. 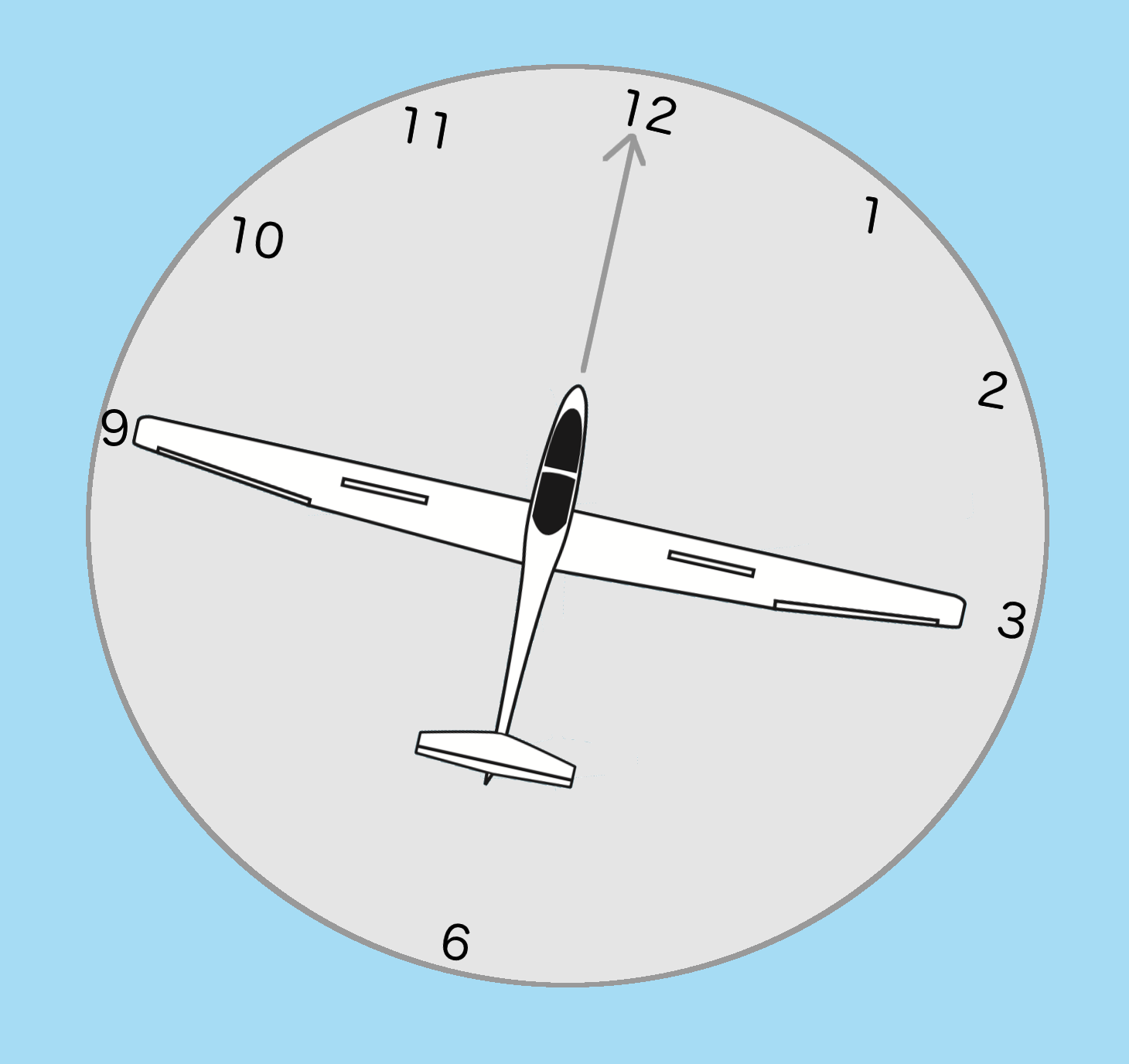 A very efficient method to quickly identify other aircraft is to use the clock method. For example: “glider at 2 o’clock higher”; “helicopter at 11 o’clock slightly lower;” and so forth. 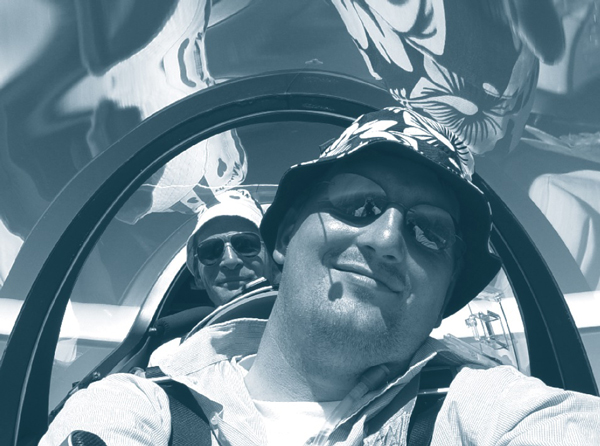 By always looking out carefully you will avoid surprises. Hats with fancy patterns or colours can cause reflections in the canopy and limit the instructor’s view. That’s why many glider pilots wear darker sunhats when seated in the front seat of a two-seater glider.

Even when you can fly every exercise perfectly, but you can’t do a thorough lookout, you cannot fly alone. Practice watching all the aeroplanes around you and remembering their position as well as their direction. The lookout plays an important role in all flying exercises. For example: you will not initiate a turn before you have checked the direction of the turn and convinced yourself that the airspace you need is clear of traffic.

Pay extra attention to aircraft flying at the same altitude, especially if they are flying towards you. Sometimes they are very hard to see and the closing rate can be high. If it looks as if an aircraft is hardly moving horizontally or vertically, but it is getting bigger, it is coming towards you and you need to alter your course immediately to avoid a possible collision. Any aeroplane whose position in the canopy does not change but increases in size is on a collision course!

Any aeroplane whose position in the canopy does not change but increases in size is on a collision course!

Think ahead; change direction and always consider the possibility that the other pilot has not seen you. A white glider with a cloud in the background is often hard to see. The sun or the weather can make it even more difficult to spot a glider, especially when the sun is low or when the air is very humid. Sometimes it is hard to tell by the silhouettes of gliders whether a glider is moving towards you or away from you. Even in bright weather, gliders at the same height are often difficult to distinguish, because of the bright background and the many details on the horizon.

There is a so-called “scan cycle” method in which you deliberately pause your lookout in every direction for a moment to look more closely. Your eyes need about two seconds to adjust from looking at your instruments to looking in the distance. Keep in mind that when the visibility is poor, your eyes might focus more on your instruments than on the outside world. If this happens, you have spent too much time looking at your instruments and not enough time looking outside. Whenever you notice this, you should have a quick look at the landscape below and then scan the horizon.

The scan-cycle might look like the illustration above: you start at one side, over the nose of the plane towards the other side. Then you look at the direction in which your nose is pointing in relation to the horizon (the "attitude") and your instruments before starting a new cycle. Remember to pause in every direction for a closer look, and don’t forget to check the blind spots behind you, directly above and below you, from which an overtaking glider can emerge. So in short, the scan cycle is: lookout - attitude - instruments. 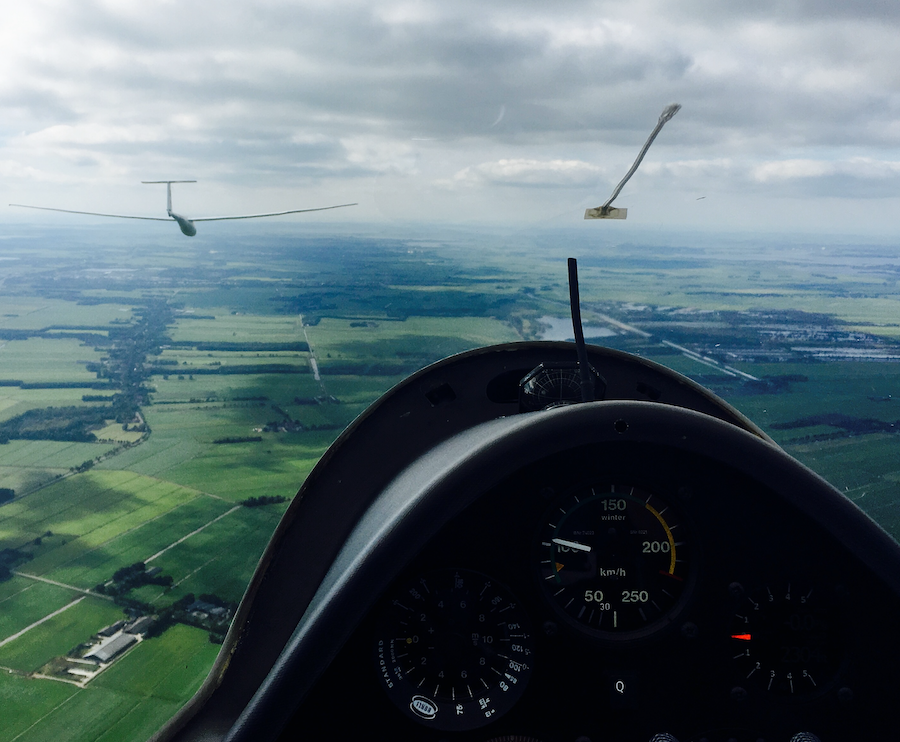 When landing, the lower flying glider has right of way. (1)

When two gliders fly head-on, both have to make a right turn to avoid a collision. (2) 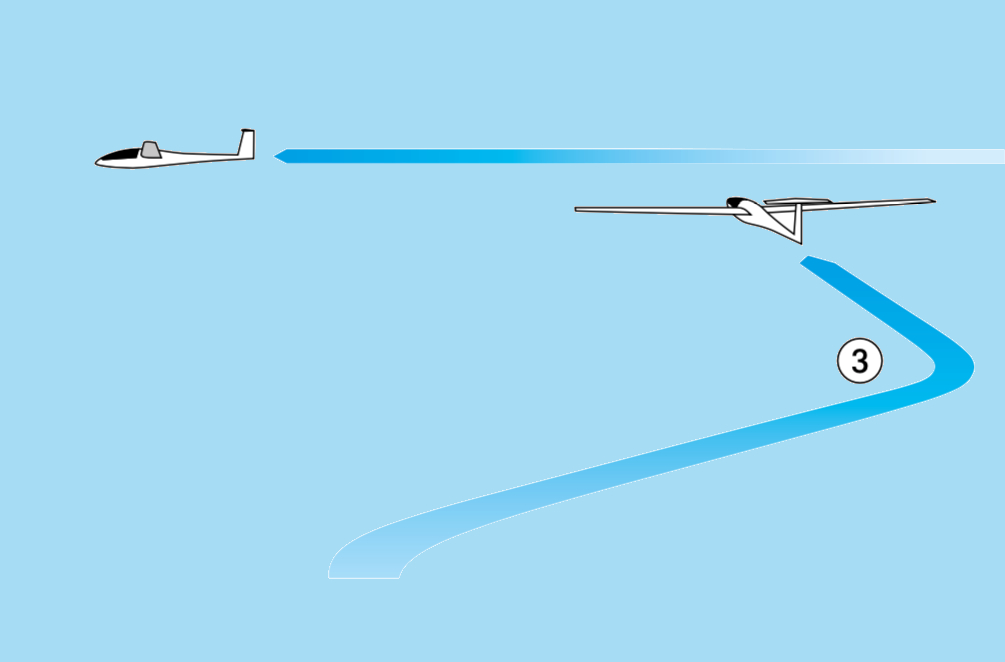 A glider coming from the right has priority, make a right turn to give way. (3)

Overtaking a slower glider has to be done either on the right or on the left of it while keeping a safe distance. Never overtake a glider slightly above or by diving below it! (4)

A glider has priority over a motor-glider or aeroplane. (5) 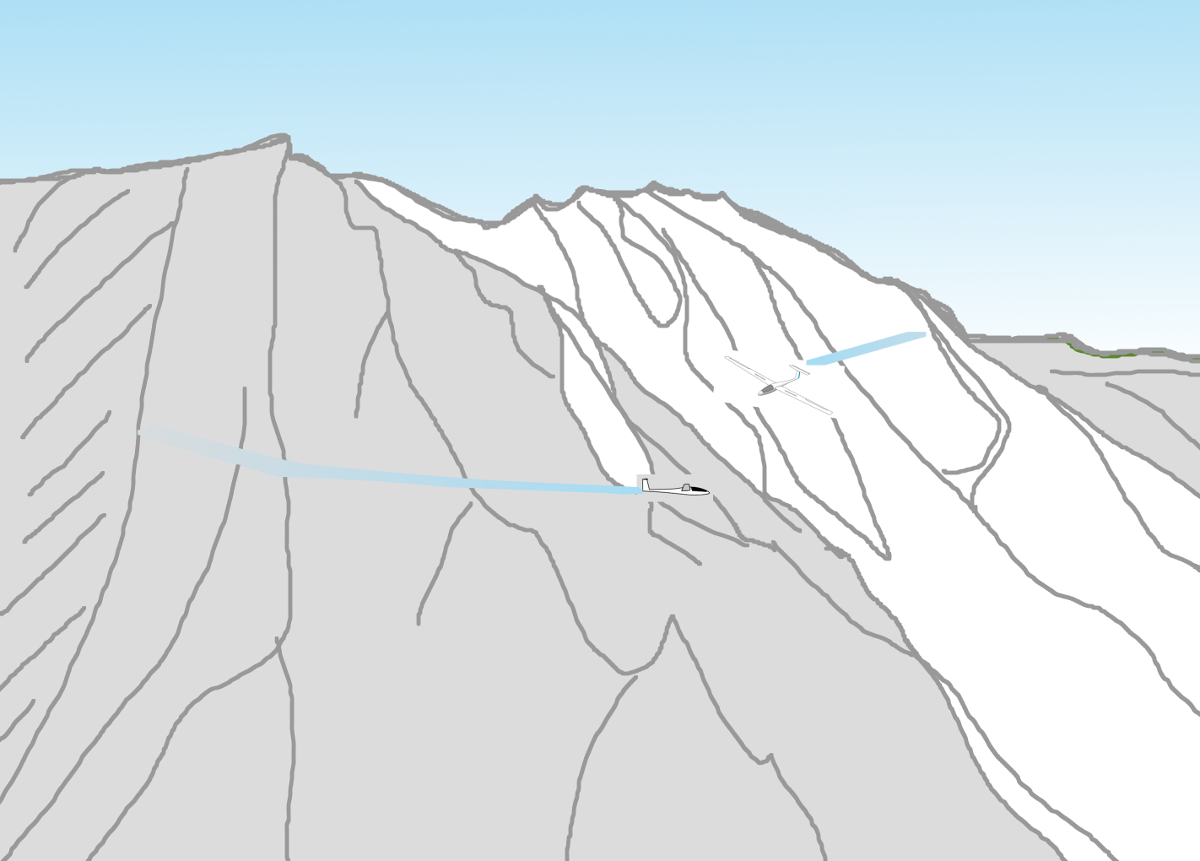 The glider with the mountain ridge on the right has priority (6).