Key points of attention:
COORDINATED VERSUS UNCOORDINATED TURNS
A coordinated turn uses the right amount of rudder deflection for the required bank angle. The nose of the glider follows the circle you are flying. The yaw string is pointing straight towards you. The fuselage stays more or less exactly straight into the airflow (see illustration below).

SKIDDING
Skidding in a turn is a situation in which you use too much rudder for the amount of bank you have. The rate of turn increases too fast while the bank angle remains the same. As a result the glider will yaw to the inside of the turn. You can also see that this is happening by watching the yaw string: it will point to the inside of the turn. The inner wing has a reduced speed compared to the outer wing, and the airflow on the inner wing also gets disturbed by the glider’s nose and fuselage. The inner wing is “in the shadow” of the fuselage. If you are flying too slow or close to your critical angle of attack (the angle where the airflow no longer can follow the wing, see Lesson 23), skidding may result in the air separating from this wing. A spin can be the result of skidding turns (see Lesson 25).

SIDE-SLIPPING
The airbrakes are very effective for increasing the rate of descend during an approach. But if you need to lose altitude quickly you can also combine the airbrakes with a side-slip. When a side-slip is performed intentionally and correctly, there is no turning motion because the nose is now pointing opposite to the bank angle. Nowadays, a “side-slip approach” is an advanced gliding technique. In the early days of aviation, gliders were not equipped with proper airbrakes and side-slipping was the only way to lose height on final approach. 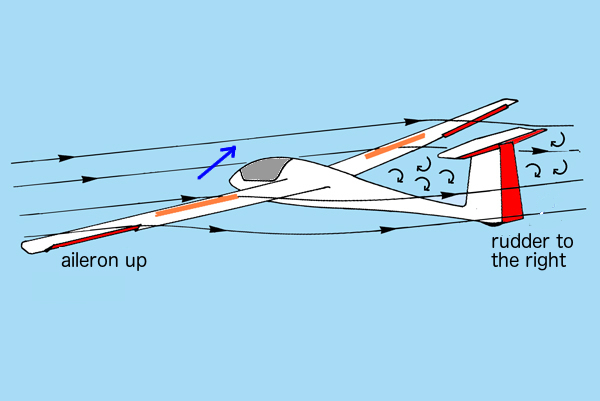 Forward slip: the heading is opposite to the bank angle, while you maintain the original track. The use of the airbrakes increases the rate of descend even more.