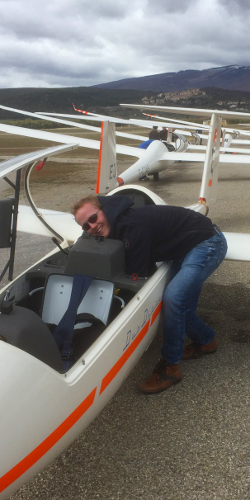 Joke Corporaal (1979), Dirk’s youngest daughter, PhD in literature, experienced writer and editor, as well as a keen violin player, likes to keep both feet firmly on the ground.

A short introduction to the book

As a flight instructor you must be able to give your students short and clear briefings on how to perform different exercises. When Dirk became an instructor in 1995, he made short notes on each exercise, using the syllabus used by the Dutch Gliding Association. These notes became short briefings and these short briefings finally led to this book. It was first published in a pocket size version in 1995 and many student pilots carried it with them on the airfield to prepare for their lessons. This caught the attention of the Dutch National Instructors Committee. After extensive consultation about its contents and various meetings on how to perform each individual exercise best, the book became the official training textbook in the Netherlands.

The first edition of the book ELEMENTAIRE ZWEEFVLIEGOPLEIDING (GLIDING. A BASIC FLIGHT TRAINING) appeared in 1996 and included 3,000 copies. In 1999 the second edition appeared with 5,000 copies. The book was rewritten and updated in 2013; Henk Jukkema, a professional illustrator and gliding enthusiast, remodelled all the illustrations. In total more than 20,000 copies have been sold throughout the Netherlands and Belgium.

The book has been translated into German by the Deutscher Aero Club (the German Gliding Association) in 2019. The first edition of 10,800 copies sold out quickly, which led to a second edition of 6,000 copies in 2020. In Germany the book is called SEGELFLIEGEN GRUNDAUSBILDUING and it is currently being used as the official basic training textbook. An Italian translation Volo a Vela  (based on the German edition) is  printed in 2020. You can read the pdf-version here.

Roelof translated the book into English in 2020. He decided to divide the different exercises into 34 separate lessons, so that a student can prepare more easily for the next flight. Joke edited the English translation of the book. Her aim was to let the new text run just as smoothly as the Dutch original. The English version contains 124 pages. Our goal is to provide an up-to-date version for all English-speaking countries where people fly gliders.

Concerning the online edition of the official British Gliding Association - Student Pilot Manual, the text is the result of an intensive collaboration between the authors and a committee of experts within the BGA led by Andy Miller and CEO of the BGA Pete Stratten.

This book uses modern plastic gliders as an example. At your local club or flight school you may fly gliders that differ in design and construction. The cockpit layout in illustrations is not based on any specific type of glider and only the most important instruments and flight controls are shown. Many illustrations are not drawn to scale; the glider is often shown a little bigger to provide a clearer image.
This book has been created with the help and advice of many instructors. Since its first edition in 1996 it has been been continuously revised, updated and improved. Your feedback will be highly appreciated.

We hope this book will be useful in your flight training and will contribute to many beautiful flights and safe landings.

Email: This email address is being protected from spambots. You need JavaScript enabled to view it.