When you start learning to fly, you initially have to devote all your attention to handling the controls, relying on your instructor to monitor the glider’s height and position relative to the airfield and to prompt you when and how to fly home. As your handling skills become more automatic you’ll have thinking time to keep track of where you are and you’ll soon get to know the navigational landmarks near your home airfield. But how will you find your way home when you fly solo, further afield, to places you’ve never been before? In this lesson, your instructor will show you how, using a flight computer and aeronautical chart.

Proper preparation is as important for navigation as for other aspects of flying; studying your intended route beforehand, marking it on your paper chart and programming your flight computer before take-off will give you a better idea of what to expect en route, and more time to concentrate on flying (rather than navigating).

Awareness of wind strength and direction is very important for all aspects of glider flying; navigation is no exception. If you’re using ridge or wave lift, the wind determines where and how strong that lift will be. If you’re flying in thermals, you’ll get drifted downwind as you climb; when cruising
between them, the wind will influence the direction you go. Should you need to make a field landing, wind direction will be vital for this too (see Lesson 4.34).

There are several useful indicators of surface wind, even if you cannot see a windsock:

However, when navigating it’s important to know the wind at flying height, it will usually be stronger, and blowing from a slightly different direction than that on the surface. There are useful indicators of upper wind, too:

Remember that, unlike the glider’s course, the wind direction is identified by where the wind is blowing from; so a westerly wind is one that is blowing from the west (whereas a glider on a westerly course is flying towards the west).

When navigating an aeroplane, there are four important terms used to describe where we’re going: 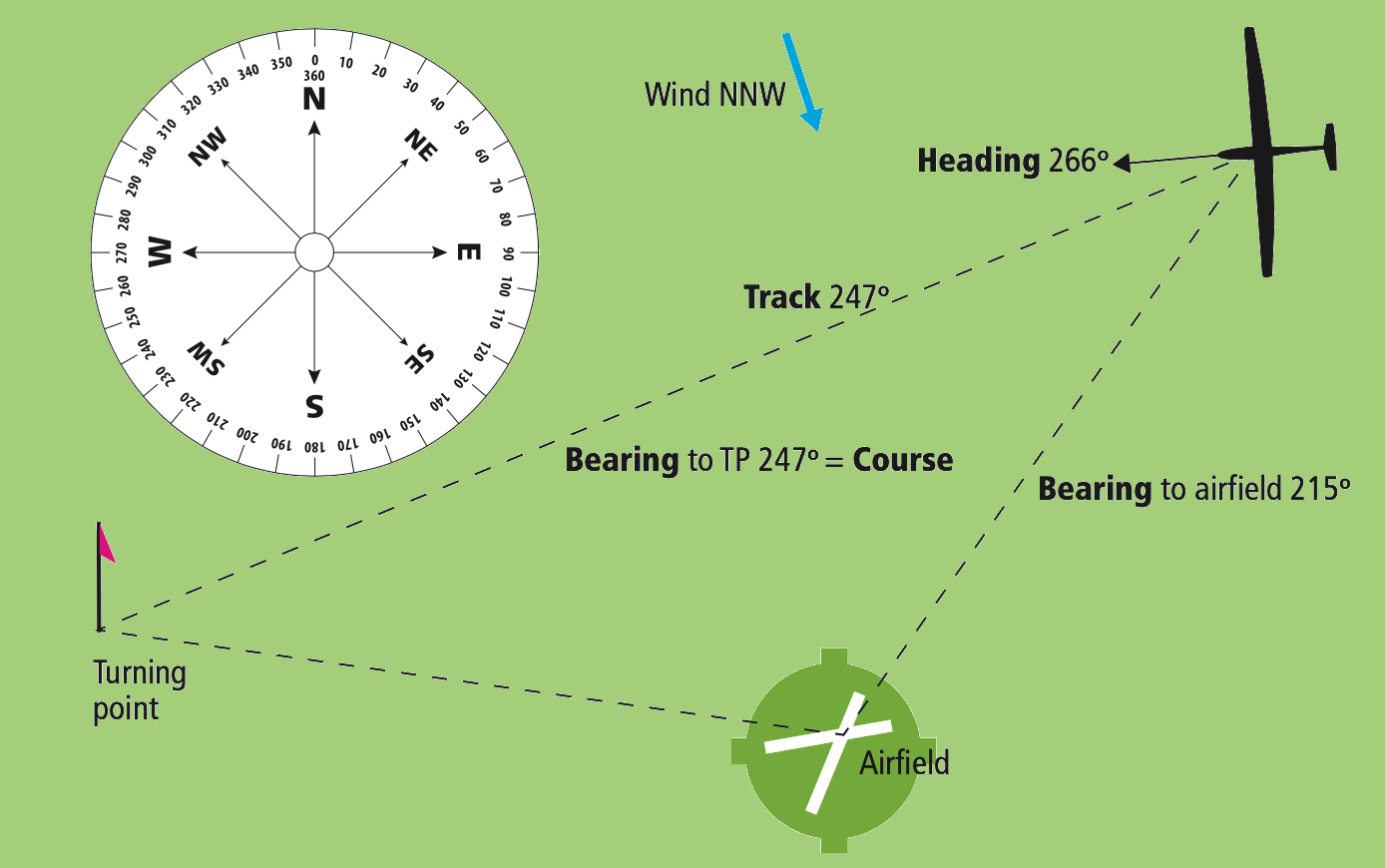 HeadingThe direction that the glider’s nose is pointing. You can judge this in relation to ground features found on your chart, or by looking at your magnetic compass (which is, however, subject to error if the glider is turning or accelerating).

TrackThe direction that the glider is moving over the ground. In no-wind conditions this will be the same as the heading, but if there’s a crosswind, they will differ (see Diagram).

Bearing The direction to the specified location from your position, measured in degrees on a 360-degree scale.

Course The bearing of your next destination. If your track is the same as your course, then you are flying straight towards your destination.

Navigating a glider when flying cross-country typically uses a combination of three techniques:

In gliding, your track will often be different from your course, as you search for rising air in order to continue your flight towards your destination. 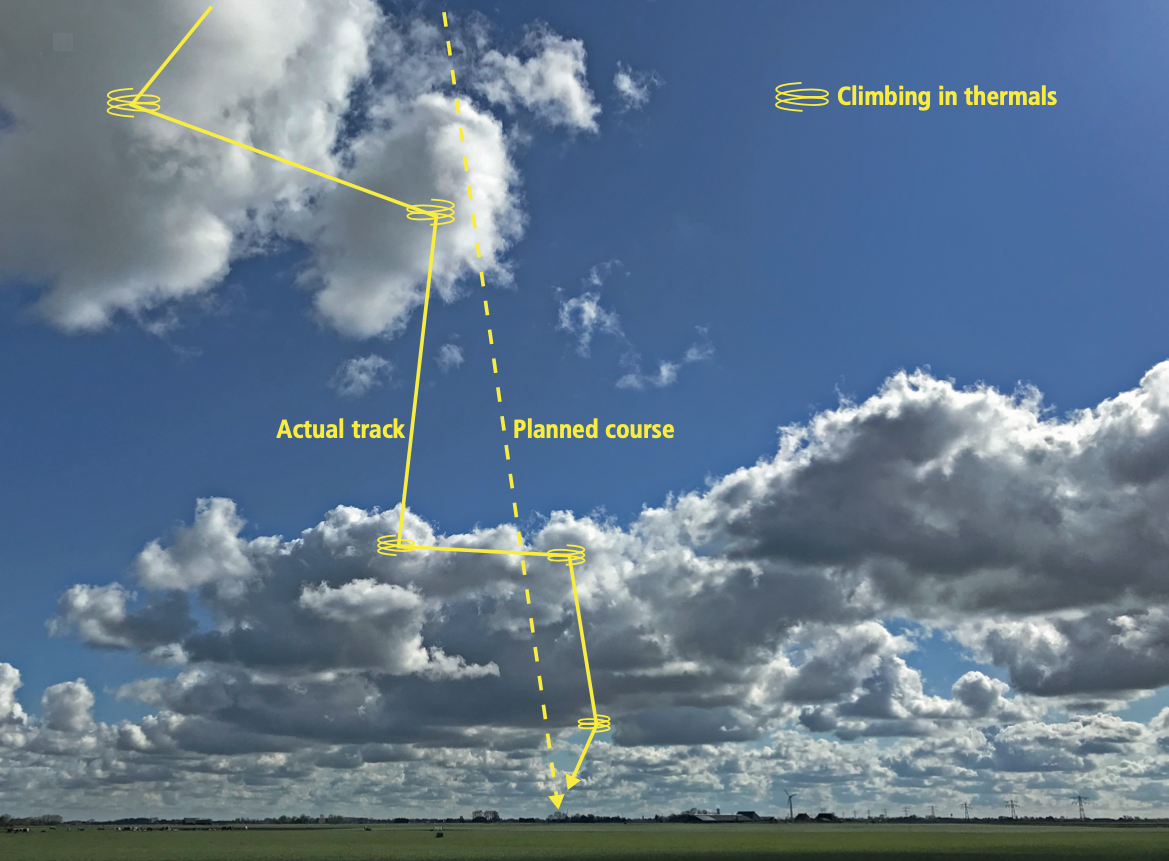 This is navigation by reference to landmarks and ground features, which should be both easy to see on the ground and identifiable on your chart. Larger towns, airfields (both active and disused), large rivers and lakes are all good landmarks.

Continually search the ground along your intended course for a couple of distinctive ground features, then identify them on your chart. Fly your course in relation to these features, picking out new ones further down track as you go. Major roads and railway lines perpendicular to your route can be useful for judging your progress, while those that are parallel to your route can confirm that you’re flying in the right direction Keep track of your last known position on the chart as you go. If unsure of your position, pick out three nearby distinctive ground features and try to locate them on the chart in the vicinity of your last known position. Study your chart’s legend to understand how landmarks are represented. Almost everything that’s visible and recognisable from altitude is there, along with lines marking the completely artificial and invisible airspace boundaries that you must nevertheless be aware of, and may have to avoid. In addition to lateral limits, these volumes of airspace have upper and lower limits, so that the chart is a two-dimensional representation of a  three-dimensional reality. You will learn in detail how to interpret this before you take your exam for your licence.
Beware of features that are not unique. Most small towns, for example, look surprisingly alike from the air. It is rarely wise to put faith in small features. The large boxes and coloured circles indicate the airspace restrictions.

There are many different flight computers on the market and many gliders nowadays have one fitted. They can make navigation a lot easier - provided you know how to use them. They all use satellites, such as the American GPS or European Galileo systems, to determine your position very  accurately; the generic term for these systems is Global Navigation Satellite Systems (GNSS). 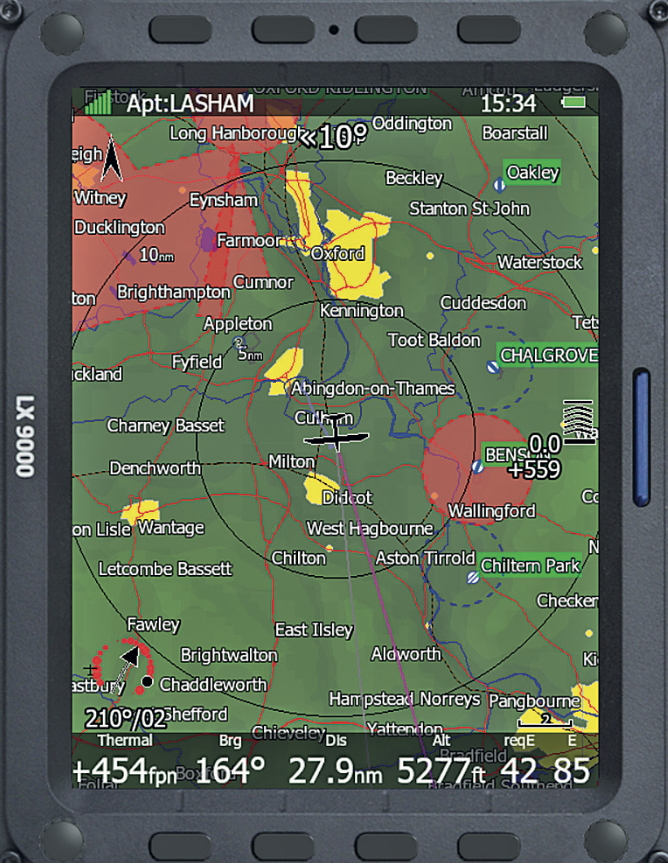 Example of a modern flight computer. The possibilities are endless.

In addition to GNSS, some gliders’ built-in flight computers also use pressure, temperature, acceleration and even live weather data to make even more accurate calculations. Most provide a moving map that also displays airspace restrictions. There are also portable flight computers for sale. Alternatively, you can install flight computer software as an application on your mobile phone. These two options are often cheapest, but have the disadvantage that they take up extra space in the cockpit; you must also make absolutely sure that they are mounted securely where they will not obstruct the flight controls.
A modern flight computer can perform hundreds of calculations simultaneously. But really, only a couple of things are really important when you want to get from A to B:

Other calculations that modern flight computers can make are: wind direction and strength, distance to your goal, height above ground level, ground speed, speed-to-fly based on the McCready theory (see Lesson 4.26), ETA (= estimate time of arrival) and so forth.

Practise using your device on the ground and in the local area before leaving home. Read the manual. Make sure you don’t have to figure out how a new system works while you are flying, that would be too much of a distraction. 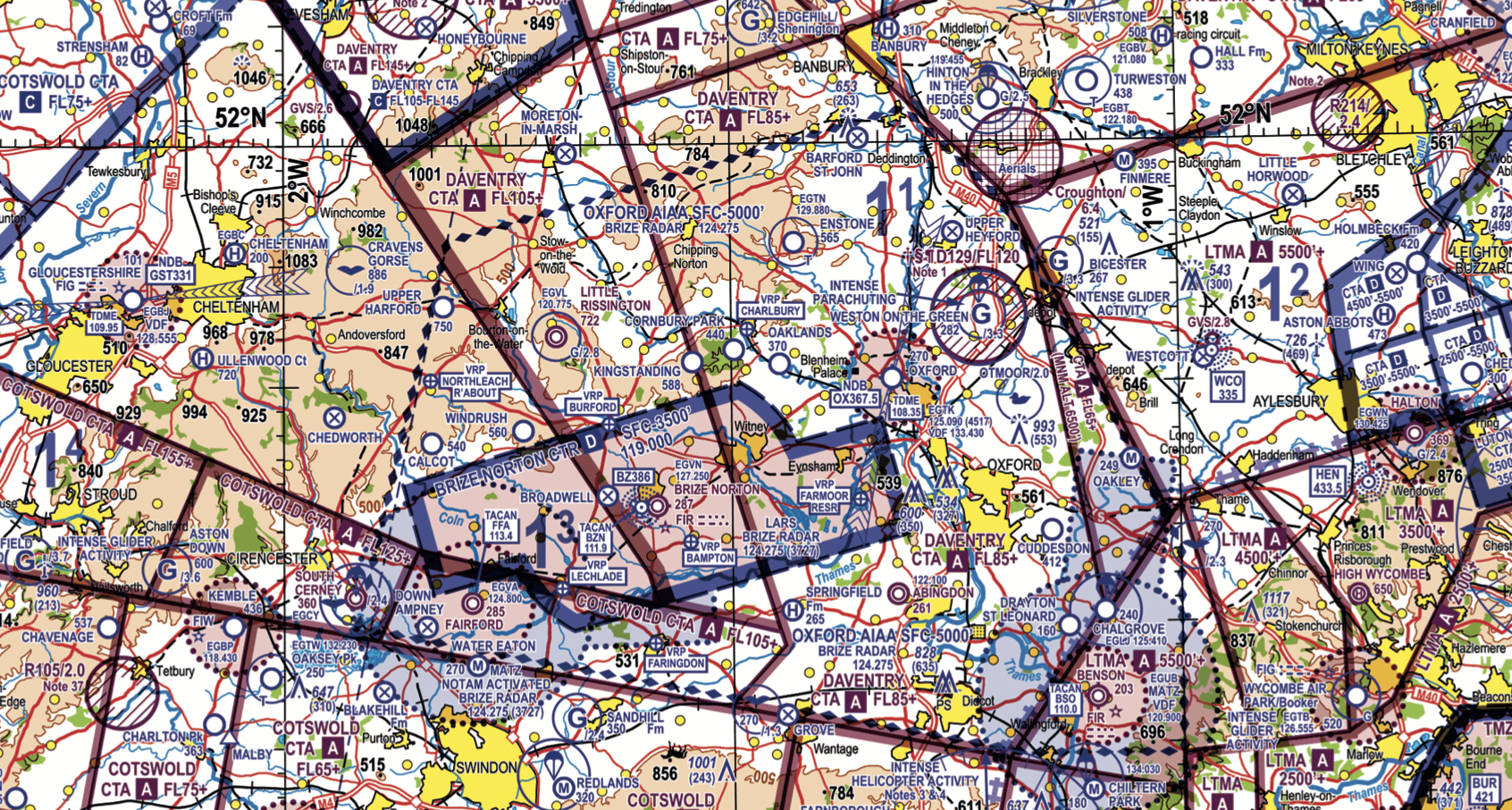 Supplied by CAA and NATS. Not for navigational use.

In addition to a flight computer, most glider pilots use the most recent aeronautical chart to find things quickly and easily. You’d be wise to master both ways of navigating. One of the advantages of a traditional map is that the battery can’t run out.

You will soon find out that navigating is much easier when you fly a bit higher. After all, when you are flying low, you can’t see as far, you will generally be busier flying the glider and trying to find thermals, and you may have to decide to make a field landing. If you do get lost, stay calm and remember that this has happened to most glider pilots at least once. Focus on flying the plane first and make a plan after that. Often it is wise to just fly in the direction of the planned course until you come across something that you recognize again. But make sure that you don’t accidentally enter prohibited airspace, because this could be dangerous for you and for other traffic.

Sometimes it can also help if you can climb a little higher so you can look for clues further ahead. 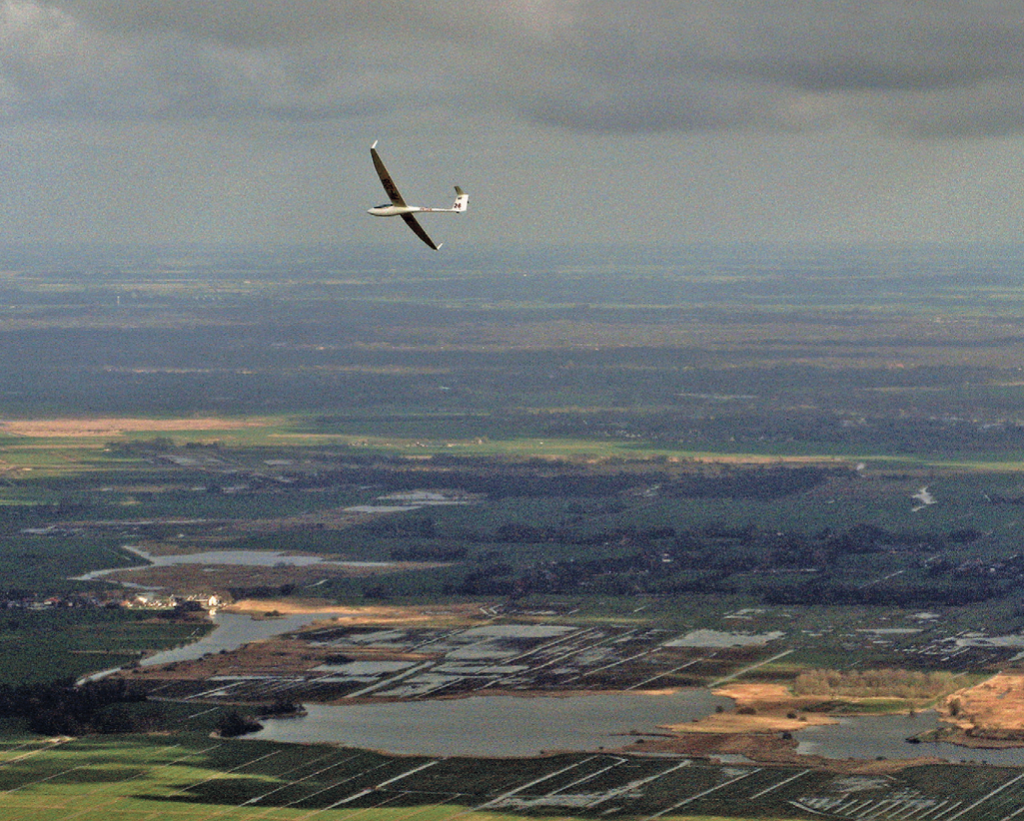 A third option is to make one big turn, which might allow you to identify eye-catching landscape elements that correspond to those on your map. If none of these options has been helpful, then you can use the feature on your flight computer that lets you choose from a list of nearest airports. We recommend, again, finding out how this feature works on the ground before you might need it during flight.

Three last tips that can help you getting back on track when you are lost: