During the following exercises you will experience what happens if you are flying too slow. You will learn to recognize the signals of flying too slow well in advance, so you won’t be surprised when the glider stalls. You will also learn how to recover from slow flight and stall.

LIFT (L) AND ANGLE OF ATTACK (α)
The wings create the lift that is necessary for a glider to fly. Let’s just briefly repeat what you’ve learned in Chapter 2. The air on top of the wings flows faster than the air below. In faster moving air, the air pressure is lower. The different airflows on top of and below the wings create a pressure difference, which in turn results in an upwards force on the wings: Lift (see illustration). 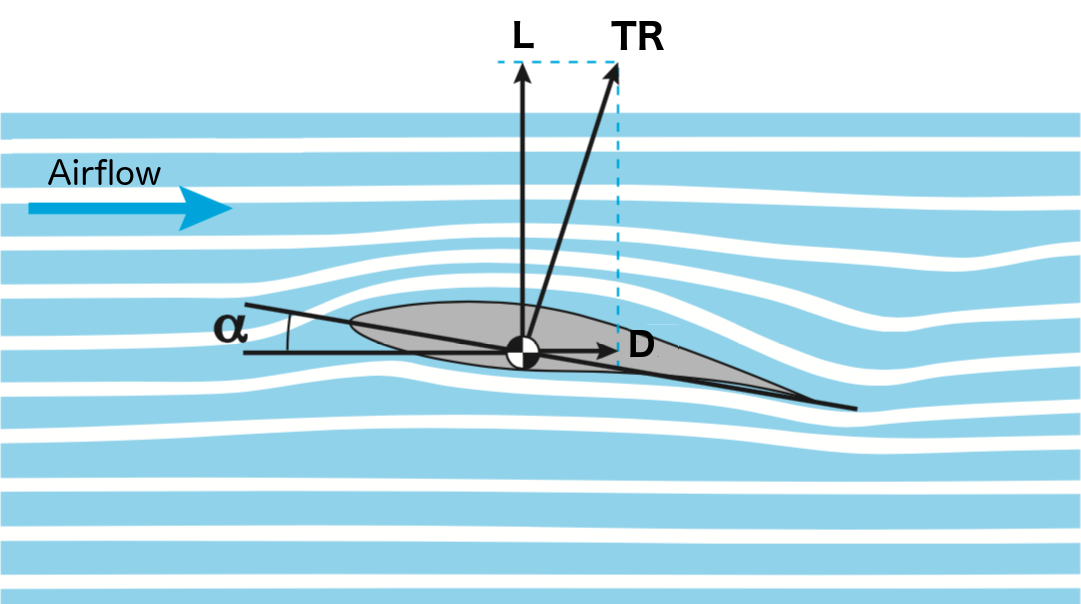 The easiest way to describe ‘angle of attack’ is the angle a wing makes with the oncoming airflow.

If you fly faster, the air around the wings will flow faster. The pressure difference between the top and bottom of the wing increases and therefore the lift increases. The lift also increases when the angle of attack increases. However the angle of attack cannot be increased endlessly. If we reach the limit (the “critical angle of attack”) the airflow can no longer follow the top surface of the wing and it will separate from the wing (see illustration). When this happens, the lift will decrease significantly and the drag will increase.

The illustration shows the difference in angle of incidence between the tailplane and the wings.

Even though you won’t need to practise high speed stalls before flying your first solo flight, it is good to know how they work. High speed stalls are very popular in advanced aerobatics and you will see them in every air show. Just after stalling, the glider can reach very high roll rates, which allows the pilot to carry out all sorts of spectacular manoeuvres. The stall speed of a glider is affected by its weight and load factor, which are in turn influenced by manoeuvring and environmental conditions . A heavily loaded glider stalls at a higher airspeed than a lightly loaded glider. We can understand this by imagining how, in order to support the extra weight, the glider will have to adopt a higher angle of attack to generate more lift and fly at the same airspeed. In some gliders we can add extra weight by adding trim weights or putting water into the glider's tail. Trim weights are used to compensate for a forward shift in centre of gravity and to keep the stall characteristics more or less the same at different cockpit loads.  However, bear in mind that you should never add too many trim weights or put too much water in the tail, because your centre of gravity would shift too far backwards. This could potentially be very dangerous as it would make your glider unstable!

A higher risk of stall is expected in the following cases:
THREE EXERCISES – THE PREPARATION

Before you do an exercise that consists of large speed -and altitude changes, you will have to perform the pre-manoeuvre/aerobatic checklist (see Lesson 3).  To save valuable flying time, you can already largely discuss the checklist before the flight, but you will have to repeat it just before the exercise. In addition, we advise you to trim the glider for a normal speed and to not perform exercises in the direction of the sun – the bright light would limit your vision.

Before a glider stalls, there are several warning signals that you can see, hear and feel:
1: SLOW FLIGHT / RECOGNIZING AN IMPENDING STALL
You will start this exercise by flying two half circles to make sure that there are no other planes above or underneath you. After these lookout turns you maintain a straight flight with the wings level. Now slowly start to pull back the stick, further and further. Initially the pitch attitude increases. You keep the nose just slightly above the horizon by gradually pulling back the stick, thus slowly increasing the angle of attack. Let the glider fly as long as possible without stalling it and constantly tell your flight instructor all the signals as soon as you see, hear or feel them. Recover early, before the glider stalls completely, by easing the pressure off the stick and lowering the pitch attitude back to normal. The airspeed will increase again.

Repeat exercise 1 but take a slightly higher pitch attitude and instead of recovering early, try to maintain your high pitch attitude as long as possible until you reach the critical angle of attack (1). The signals of an impending stall will only be noticeable for a short time. At some point you will find yourself in a stall and you will be unable to maintain your pitch attitude (2). Due to the centre of gravity, the nose will drop. Recover by gently pushing the stick forward; the nose should be well below the horizon (3). Return to a normal pitch attitude after the airspeed has increased again.

The previous two exercises show that you push the stick forward to recover from stall. Even though the nose lowers itself in a stalled condition, you also need to push the stick forwards to increase the airspeed. If you do not recover from stall by pushing the stick forward, or if you keep pulling the stick: the glider will stall again. Most training gliders have what we could call good-natured stall behaviour. They clearly warn you that a stall is imminent. Other school gliders are so good-natured that they will not react violently – even when the stick is being pulled at constantly. They will simply react by going into descend, possibly accompanied by vibrations caused by the separated turbulent air from the wings hitting the tailplane and elevator. However, there are also training gliders that are not as good-natured. They will become more unstable near the critical angle of attack, the warning signals of an impending stall may be less clear and stalls may occur more sudden and aggressively. Whether your glider is good-natured or not, it is important that you train how to recover from stall so you know what to do automatically: release the stick, push it forward gently, and make sure the airspeed increases.

3: STALL IN A SKIDDING TURN / RECOVERING FROM A WING DROP


In Lesson 5, we practised coordinated flight: a situation in which the control inputs are balanced and the yaw string is straight. Without balancing the control inputs, one wing may reach the critical angle of attack before the other does and cause a wing drop. This means that one wing has reached its critical angle of attack while the other wing keeps flying. If, during a stall, one wing wants to drop, you need to recover by applying an opposite rudder input to stop the yawing/rolling motion; quickly release the control stick pressure and push the stick forward to reduce the angle of attack.

We will now explain this in more detail, before you will practice how to recover from wing drop yourself. The stall behaviour of your gilder can change suddenly if you stall in a turn at low airspeed. This is perhaps done more easily than you expect. You might be flying a curve at a low airspeed and apply too much rudder in the direction of the turn. The outside wing will then travel faster and generate more lift. The inner wing is being slowed down by the additional yaw and reaches the critical angle of attack. The airflow on the inner wing separates from the wing and it drops in the direction of the curve. (A “spin” can also be the result of a stall in a skidding turn, see Lesson 25). If you recognize that one wing is dropping, you should not use the ailerons (the control stick to the left or right) against the drop, because an aileron deflection will only cause additional lift and additional drag on the dropping wing. That would increase the angle of attack further and slow down the wing even more, making the stall worse. Instead, we use the rudders to correct for the wing drop.

In this exercise you will initiate a turn at a bank angle of more or less 30°. We slowly pull the stick back to increase the pitch attitude gradually until the glider’s nose is just above the horizon (1). With a slight aileron deflection against the direction of the turn, you prevent the bank angle from increasing. When the airspeed gets low you apply some rudder in the direction of the turn to increase the rate of turn (2). This will make the inner wing stall and cause a wing drop (3). You now need to apply opposite rudder until the yawing/rolling motion stops and push the stick forward to lower the pitch attitude. Neutralize the flight controls and return to a normal pitch attitude after the airspeed has increased again.

It is important that you are able to recognize and react to the warning signals of an impending stall, so that you can restore the normal flight conditions quickly. To recover from stall, push the stick forward to lower the pitch attitude. If a wing drops; use opposite rudder. Do not use the ailerons, doing so will make the stall worse. And even though it hasn’t been mentioned above, it goes without saying: never fly slow when you are close to the ground and – above all – avoid skidding turns in the circuit for landing. You would not have sufficient height to correct and restore the balance.