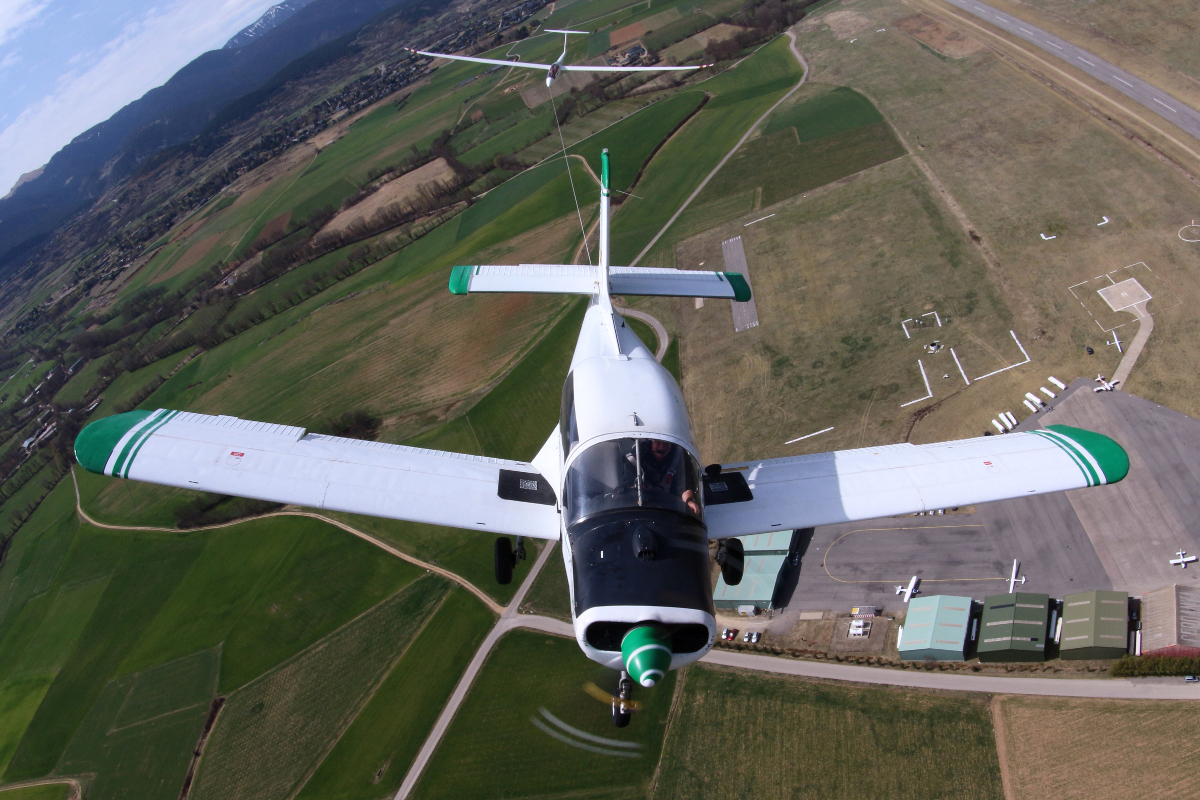 Before take-off: During the initial acceleration: During the climb: After releasing (2x):

Launching by aerotow is markedly different from winch launching and requires a very different technique. You will learn how to fly aerotow launches step by step. On your first tow, the flight instructor will demonstrate how you make the initial acceleration and initial climb. After having reached a safe height above the ground, he or she will hand over the controls to you. You will soon notice that following the towplane requires some practise. But as soon as you get the hang of it, your instructor will let you do the full take-off. In this lesson we will describe an aerotow from the start in calm wind conditions.

BEFORE TAKE-OFF
The aircraft flight manual specifies where the towrope needs to be connected. The rope is usually connected to a nose-hook. The airspeed during an aerotow is often a bit higher than during a winch launch, therefore we set the trim slightly forward of neutral (nose down). However, compared to winch launching (which takes you to 60 knots within seconds) a towplane needs more time to reach this speed. This means that the wing runner will have to run farther and hold the wing for a longer period of time than during winch launching. Make sure the glider is lined up neatly behind the towplane before the launch. This is important because, as long as the airspeed is still low and the glider still has its tailwheel/skid on the ground, you will have little directional control.

DURING THE INITIAL ACCELERATION
It might be useful to know that your ground roll (the distance before the glider takes off) will be relatively long. Make sure you keep the wings level using the ailerons and stay directly behind the towplane using the rudder pedals. Because of the low speed, your flight controls won’t be very effective in the beginning of the take-off. For that reason, you will have to make quick and large control inputs to correct for deviations. During the first seconds of the aerotow, keep the elevator neutral and focus on keeping the wings level. If a wing drops and touches the ground, release immediately! The rudder will become more effective when the speed has increased. Ideally, you should try to balance the glider on its main wheel. That way, the glider will become airborne automatically.

TAKE-OFF AND INITIAL CLIMB
Usually the glider takes-off first. As long as the towplane is still on the ground, you must take care not to climb. Hold the glider as close as possible to the ground, preferably at around 3 feet, until the towplane takes off as well.

Do not climb any further to avoid lifting the tail of the towplane!

Launching by aerotow requires a lot of concentration. You won’t have much time to look around you. Instead, you will need to keep a constant eye on the towplane so you can stay directly behind it and respond immediately to changes in pitch attitude and course. Especially in the initial phase of the tow, it is not a good idea attempting to do other things at the same time (for example: closing the sliding window, putting some maps away or chasing a fly that is bothering you). If you don’t concentrate, there is a serious risk that you won’t be able to correct in time when this is needed.

YOUR POSITION BEHIND THE TOWPLANE
If the towplane climbs, you climb with it, and if it sinks, you sink as well. The towplane’s propeller causes a slipstream, a turbulent airflow. To avoid ending up in this slipstream (which will make it harder to keep the wings level and maintain directional control), you need to adopt a slightly higher position than the towplane. Be careful not to climb too much, as this will lift the tail of the towplane.

Keep the towplane on the horizon.

Your flight instructor will show you what effect flying in the slipstream has on the glider. You will see that it is much calmer and much more comfortable not to fly in the wake of the towplane. If you want to learn more about flying in the towplane’s slipstream, then you could have a quick look at Lesson 29, where we will describe this in more detail.

If an imaginary line running from the towplane’s nose to its tail (also called ‘longitudinal axis’, see Lesson 2) and the towrope form a straight line, then you have adopted the right position behind the towplane. To stay there, you will probably have to make many small and quick corrections. The sooner you react to a change, the smaller the correction to restore the balance. If you wait a long time to react, the deviations will only increase. A towplane usually tows at a somewhat higher airspeed than a glider would normally fly at. That is why gliders tend to ‘climb over’ the towplane. You must counteract by pushing the stick forward and lowering the nose. To ease the pressure off the stick, adjust the trim forward until the control pressure disappears. Since you are now flying at a higher airspeed, the flight controls are very effective and small corrections are usually sufficient. When the towplane flies through thermals or turbulent air, it climbs and sinks quickly. The glider follows a little later. Remain focused throughout the tow; quick corrections will make it a lot easier to follow the towplane.

HOW DO I MAKE A TURN?
If the towplane starts a turn, you will have to do the same. During turns, you fly at the same bank angle and stay within the same curve (same turn radius) as the towplane. The easiest way to do this is to aim the gilder’s nose at the outer wing of the towplane. If you start the turn too early or when your bank angle is too big, you will end up flying a smaller turn radius and catch up with the towplane. The rope will become loose and start to hang. For that reason, you should initiate your turn a little later (1),

maintain the same bank angle and point the glider’s nose towards the outer wingtip of the towplane (2). 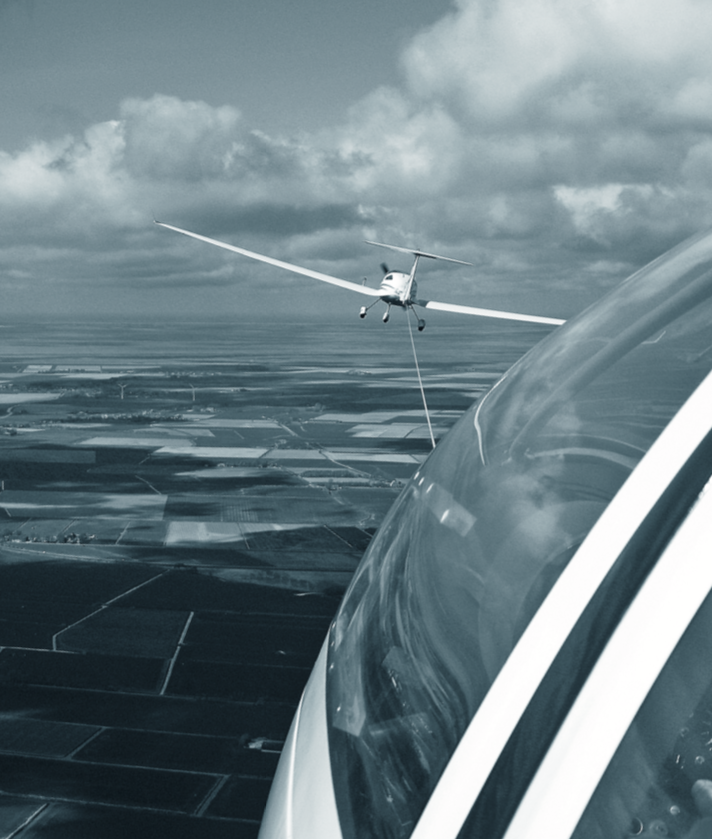 SLACK ROPE
If the rope becomes loose, wait a moment to see if it will tighten itself. A slack rope is often caused by turbulence or thermals.

If the rope sags heavily (1), you can use some sideslip to tighten it again. If this doesn’t solve the problem sufficiently, then a (more efficient) method is to carefully use the airbrakes. Braking increases the drag, which will in turn tighten the rope. Just before the rope is tightened you close the airbrakes (2). If you have lost height, you will need to climb back into position.

RELEASING
When the towplane starts rocking its wings (rolls around the longitudinal axis), it’s signalling you to release the towrope immediately. Pull the release knob twice and check if the rope has released. After release, you initiate a (climbing) right turn. 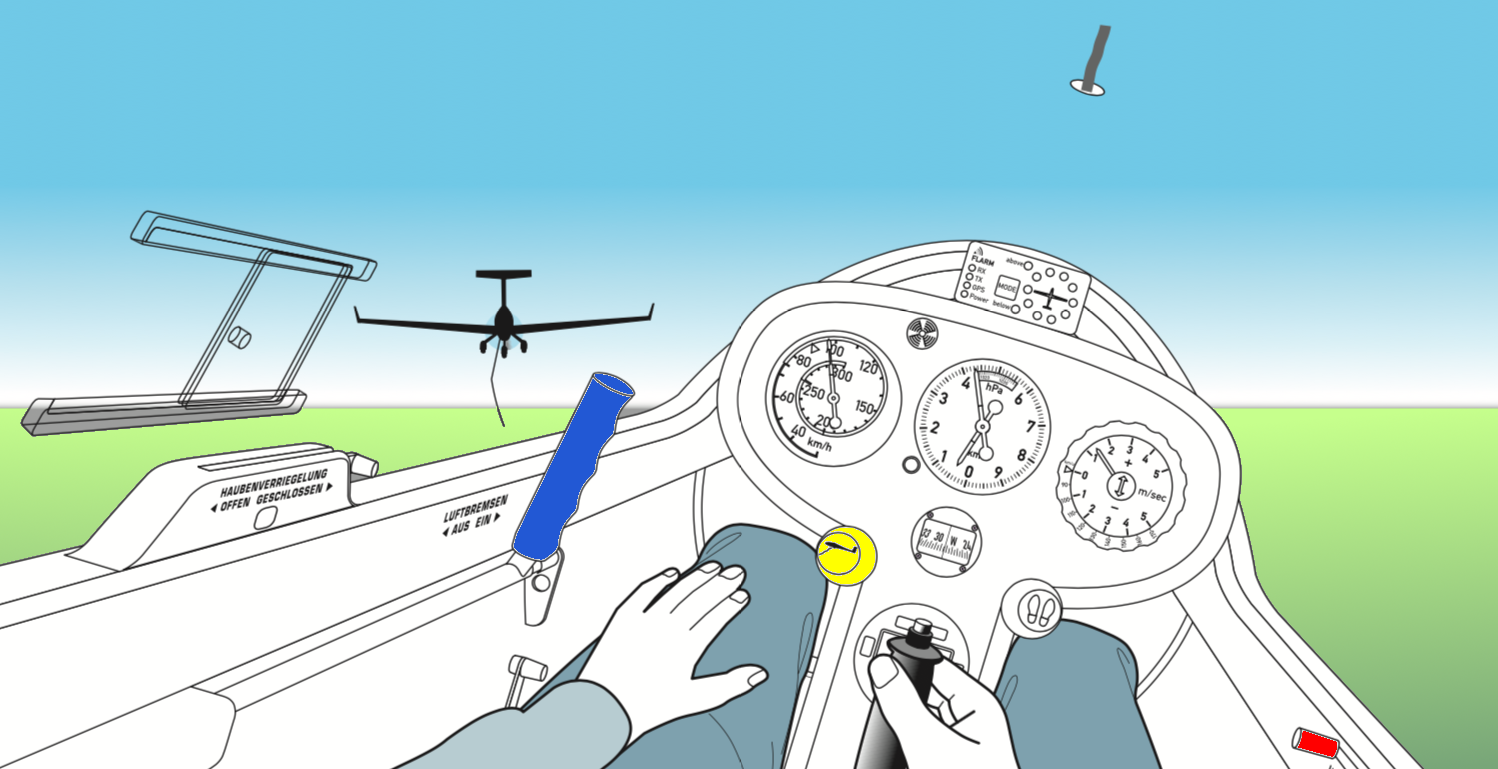 The towplane flies straight ahead until the tug pilot had checked whether the rope has been released. Your climbing right turn also confirms to the tug pilot that you have released; the distance between you and the towplane will now increase quickly. The towplane will probably start its descent back to the airfield, but different procedures may apply at your airfield; your instructor will tell you which procedures you need to follow.

RETRIEVING THE TOWROPE
Towplanes often have a retractor to pull the towrope in. Using this mechanism has the advantage that the rope is already fully retracted when the towplane lands. Sometimes the towplane lands with the rope still attached. But often the tug pilot releases the towrope above a designated location on the airfield; it can be collected only when this is safe and no more towropes will be dropped.