Key points of attention:
Before take-off:
During the initial acceleration: 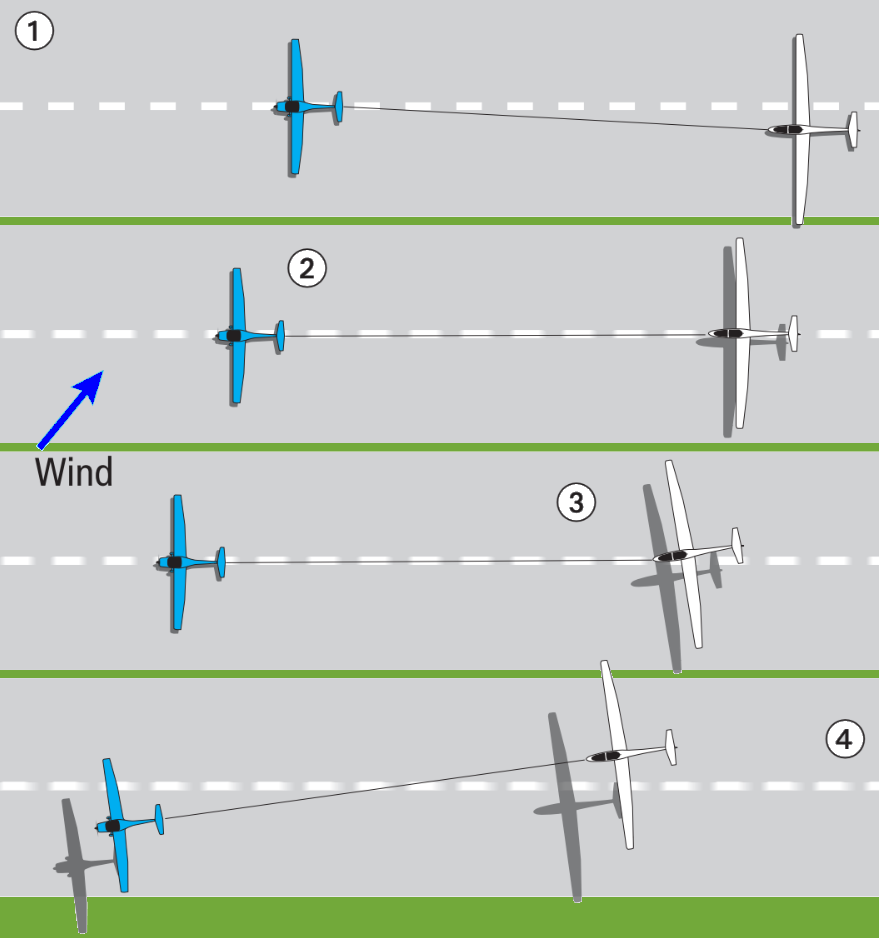 WEATHERVANE EFFECT (1)
During the initial acceleration you have to consider the weathervane (or weathercock) effect; if the wind is blowing sideways towards your fin, it will try to turn the gliders nose into the wind. You can prevent this with some opposite rudder. For example: if the wind is coming from the left, you will need to apply the right rudder when rolling on the ground. You should already apply the opposite rudder before the first movement to avoid veering into the wind. In addition it might help if you place the glider slightly upwind on the runway behind the towplane. The towrope (when connected to a nose-hook) will now help to pull the nose of the glider in the opposite direction of the weathercock effect at low speeds when the rudder is not yet effective.

JUST AFTER LIFT-OFF (2) / DRIFT CORRECTION (3)
When the glider becomes airborne, the crosswind will move the glider sideways. To stay behind the towplane just after lift-off, you need to gradually release  the opposite rudder and add a small bank angle and rudder deflection into the wind. This will make the nose of the glider turn into the wind; your heading will be slightly offset of the longitudinal axis of the towplane (the line from nose to tail). Only add a very small bank angle, if you add a big bank angle you risk the wingtip touching the ground and this should never happen. Keep flying as low as possible until the towplane also becomes airborne.

TOWPLANE BECOMES AIRBORNE (4)
When the towplane becomes airborne you can take the normal position behind the towplane again and stop applying the drift correction. The combination of towplane and glider will move as one unit and the tug pilot will correct for drift to follow the desired ground track.